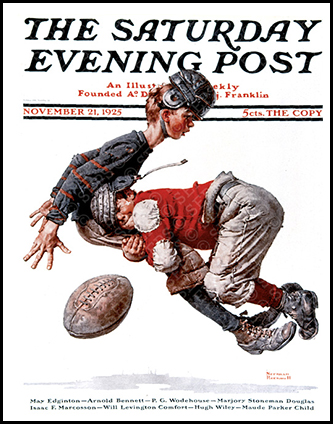 This one showed up in my inbox recently from a long-time reader:

John —
I’m a retired football coach, wrestling coach, and athletic director. During my time (1967 – 2010) I urged all my athletes to work on increasing the size and strength of their necks.I had our industrial arts teacher alter football helmets so we could attach weights to them and do various exercises in the early 70’s, we had neck harnesses, neck machines (nautilus 4-way neck was one of the best, in my opinion.) We also did neck isometrics and partner assisted neck exercises and various bridging exercises. All of this served us well. During season we did neck work at the end of practice, so we wouldn’t tire our athlete’s necks out and open them up to possible injury. In the off season we liked our athletes to prioritize neck work and did it at the beginning of our workouts. I’m telling you this, because during this time it was very difficult to find any guides, information or research on developing the neck to help prevent possible injuries. Even today many coaches, and programs just include neck work as an after thought. Michigan State and the Houston Oilers are two programs, that I’m aware of, that go about it the right way. May I suggest, that perhaps you might want to come up with a comprehensive guide or course on neck development, that could include such things as various exercises, sets, reps ,days per week, and in and out of season programs etc. I think it would be a wonderful contribution to the strength and conditioning field ,as well as elementary, junior and senior high school programs. Alex Aturnamian Waretown, New Jersey

Thanks Alex, truly outstanding stuff. You showed more initiative as an individual than hundreds of other folks in similar positions.

Even if you weren’t exactly sure *what* to do, there was at least a tension to do something to build neck strength — and, as it tured out, you did quite a bit — and you should be congratulated for it.

When it all comes down to it, an emphasis on neck training is a part of making the game of football safer and being a responsible coach, no different in many respects than making sure chin straps are buckled and shoe laces are tied.

All of your athletes benefited greatly from the actions you took.

There ARE programs out there doing a very good job in this capacity, but not nearly enough.

Many coaches want to get started but aren’t sure where to begin, which is a big reason why we have been holding our strength clinic each year.

Techniques for building strength in the head, neck and jaw are covered in detail and at length… coaches from all over the country come to present and share their programs… the equipment they use… the sets and reps they implement… how they coach their athletes to go through a workout  … how to train the neck with and without equipment… and everything else we can think of. Saying “I didn’t know what to do” will no longer be an excuse.

As I have discussed before, “physical development” is one of the most effective methods for addressing potential concussion issues. Increasing the structural durability of impact zones will go a long way in dissipating the forces that a player encounters in the game of football, which, in turn, will decrease the potential likelihood and severity of concussions.

It is estimated that if neck training took place to the degree that it should, that the number of reported concussions could be reduced by half.

We’re talking a reduction of six figures here — that’s a LOT of athletes — so whatever time, effort, and cost involved in neck training is more than worth the benefits. …and as it turns out, the cost is actual pretty minimal, but is still has to be done, and done in a manner that brings results, not just to say you did it, or what might commonly be called “lip service.”

Our major goal o pass on every possible bit of information to coaches, players, athletic directors and parents who are searching for information in this capacity so that when someone asks “have you done everything you possibly can to make the game safer for my son?” — the answer can be yes.

P.S. Here’s that link for our summer clinic one more time, if you can make it, fantastic!, but if you otherwise know someone who should be informed of this info, please pass the word on: FOOTBALL STRENGTH 2014