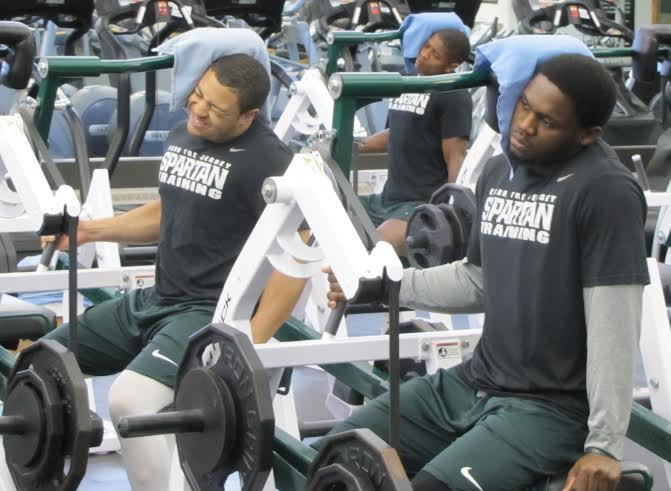 On January 31, 2014 the American Journal of Sports Medicine published an article on neck strength titled, Effect of Neck Muscle Strength and Anticipatory Cervical Muscle Activation on the Kinematic Response of the Head to Impulsive Loads. The findings indicated that male and female athletes could potentially modify risk factors for concussion by developing neck musculature. It was shown that having greater neck strength when bracing for impact reduces the magnitude of the head’s kinematic response.

The anticipatory act of bracing for a violent collision is important in protecting oneself from the effects of whiplash, yet bracing in itself is a common occurrence. When you run, neck muscles contract before your foot hits the ground. The process of running is inherently bouncy as our muscle tendon units act as springs to propel us up and forward. This aerial phase neck muscle contraction is in anticipation of the ground reaction force. Ground reaction force causes a vertical acceleration of the head that actually pitches the head forward at foot strike.

Our head, which is pitched forward upon landing, also rolls and yaws. This requires contractions of neck extensors, as well as flexors and a downward swing of an arm that dampens vertical acceleration. Each arm constitutes about eight percent of total body mass, roughly the same relative percent as the 5 to 6 kilogram runner’s head. If you consider the head in running as the primary mass then the downward swing of the stance side arm becomes the counter mass accelerating in the opposite direction, thereby dampening the skull’s oscillation. The athlete then alters their running form by bending and swinging his or her arms in movements with the appropriate power and speed to counter these varying vectors of force. Changing the mass or active stiffness of the arms through strength training and not addressing the mass and/or muscular system of the head and neck can be problematic. The coach and athlete will spend countless hours trying to achieve a particular running form that cannot truly be corrected unless they address the musculature that is controlling the movement of the skull.

There is another issue that the neck must attend to during running. When we land during sprinting we avoid falling down by utilizing the muscles of the lower back and hip – particularly the largest muscle of our body, the powerful gluteus maximus – to decelerate the trunk. As the trunk accelerates forward and then backward the head and neck accelerates backward then forward. Try this at home: Sit in your car and accelerate quickly forward then step on the brake. Vehicle acceleration provides example that the more the trunk pitches the more the head reacts. Increasing the strength and/or mass of the trunk and not addressing the strength and/or mass of the head and neck adversely effects athleticism.

As mentioned, the head also rolls and yaws during running, usually towards the stance side foot at foot strike. Once the runner is in the aerial phase one leg quickly swings forward while the opposite leg is thrust behind the body, causing angular momentum around the vertical axis. We counteract this by swinging our arms in an opposite phase to the legs to have an equal and opposite angular momentum. The neck must not only rotate in the opposite direction of the trunk but quickly prepare for being thrust vertically and forward upon landing.

The human brain is encased in a rigid skull and covered by a muscular scalp which is surrounded by three layers of membranes and floats in a protective cushion of cerebrospinal fluid. Though protected, brain trauma can occur with sudden acceleration or deceleration within the cranium. Control of head stabilization is one important line of defense for protecting the brain from perturbation. During activity, it remains relatively stable as we integrate information about the head and body from our eyes, vestibular system and proprioceptors of the neck. For athletes involved in any sport with an associated head trauma risk, protecting the brain from excessive subconcussive forces through strength training head and neck musculature for bracing is the first job of a strength and conditioning coach.

For any athlete to excel in sport, they must train the structures that decelerate opposing masses. This means that athletes must have head and neck training as part of their exercise regime. The head and neck muscles are countering arm swing, trunk pitch and rotation, as the arms are countering head pitch, leg swing and trunk movement. Developing one area and neglecting another is not conducive to optimal athletic development or performance. Train the entire system.